One of the biggest innovations from AFK Arena concerns the way it monetizes progression and paces player activity. In most RPGs, as players progress, they encounter harder and harder matchups – up to the point their team is not strong enough to progress. When that happens, most traditional RPGs present players with the option to directly purchase the things that will help them immediately overcome the challenge at hand: Hero Shards, XP, Gear, etc.

In AFK Arena as well, there are of course moments when players are stuck and can’t progress. But when that happens, players don’t have the option to simply spend to immediately move forward. This is where the game is the most innovative. Spending is of course important to get a better team. When a character has hit level cap, acquiring a dupe and ascending the hero is a way to give it a stats boost and increase its level cap. And when a player is stuck because all his heroes are at level cap – and need to be ascended – this is a hard blocker. This “ascension gate” will constitute a critical moment in the monetization lifecycle of the player: until players get enough dupes to ascend the level caped character, they simply can’t expect to progress. But ascending a character will only provide a moderate boost to stats – and ascending will not increase the character’s level. Characters need to be leveled up to progress significantly. 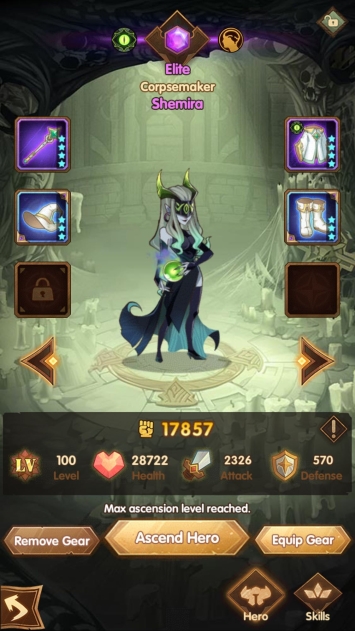 Fundamentally, in AFK spending alone can never be enough to improve your team power rating. The characters you spend money and gems to get are like the car; the resources you get to improve your character (and keep progressing) are the gas. Ultimately, players can’t buy those resources. The only way to get the resources that will help players level up a character and move forward is via the AFK mechanic. When players are blocked and need to level up one of their character or enhance their gear, their only option is to wait long enough to accumulate the required resources in the idle resource collection mechanic. AFK Arena ties in the progression and monetization loop to an idle mechanic that introduces new ways to session the player’s journey. 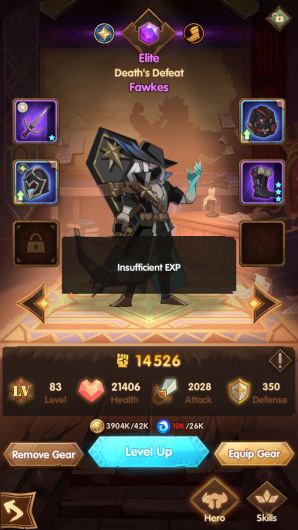 The centrality of the AFK mechanic in the progression of players has multiple crucial impacts in the way the game is structured, the type of offers that are put in front of players, as well as the content of those offers. Because players can’t directly purchase what they need in order to progress, the game’s monetization relies more on providing immediate gratification on another level (acquiring heroes rather than progressing) or rewarding players for having progressed in the game. This non-linear relation between spending and progressing also allows the game to double-down on its VIP system. With the VIP system, the indirect benefits of spending become extremely valuable for the dedicated player – perhaps even more than the items purchased.

There are 2 main types of activities in AFK – and each has its own logic when it comes to progression. One type of game modes players can only play a finite amount of time – each day, or each few days. Activities like this are the Arcane Labyrinth, the Bounty Board or the Guild Team Hunting. Players need to have a strong enough team to beat those game modes and progress. But more fundamentally those game modes need to be available to play. For example, players have 2 daily attempts at the Guild Team Hunting. Once players have played their 2 daily attempts, they can no longer play – even if they were willing to pay for it.

On the other hand, there are “open” activities. Those are activities players can play whenever they want. There is no energy system or daily cap limiting engagement with those activities. However, those activities progress linearly. Players cannot replay completed missions – they are continuously pushed to progress further. Once mission 6-28 is completed, players can only play mission 6-29, then 6-30, etc. Those activities never end. Or rather, the power requirement to get to the end is so high that in practice there is not completing those game modes. Players are never blocked because they don’t have any levels to complete anymore. For these types of activities players are only blocked because they don’t have a team strong enough to progress further. As players progress, the requirement to beat missions becomes higher and higher. Players simply need to level up their team to progress.

Now the requirements to progress in both finite and open activities are the same: you need to increase your roster’s stats. In some game modes you’ll want to rely on a larger roster (like the Arcane Labyrinth). In some you’ll only need 5 characters (King’s Tower or the Campaign). But what doesn’t change is that the main immediate source to increase your characters’ stats are Gold coins, Hero Experience and Hero Essence. And Hero Experience is the main bottleneck to level up your heroes and improve your team rating.

Each type of game mode and activity rewards players with those 3 resources (PvP is the only exception here – the Arena of Heroes doesn’t rewards players with Hero Experience. But that’s because players can spend gems to play PvP). For activities that are finite, that means there is a limited amount of resources players can collect from those activities in a given time frame. And that’s regardless of how strong a team the player has, or how much s/he is willing to spend. In AFK Arena, you simply don’t have the option to spend to get the resources you need to level up your heroes.

So, when players completed all finite activities the only option they have once they get stuck in the progression activities (and players inevitably get stuck there) is to wait. Once players completed the Arcane Labyrinth, played their daily attempts of the Guild hunting, collected their daily bounties and used up all their fast rewards, the only way to accumulate enough Hero Experience and progress in the Campaign or the King’s Tower is to wait.

The beauty of this system is that it can provide a great way to control player progression. More importantly – and this is where the great innovation is – in AFK arena progression is constrained by time passed. Not in missions played or $ spent. Say players need a team power of 78k to beat mission 6-30, and a team power of 80k to beat 6-31. The time it takes to accumulate enough resources to increase the team power by 2k is the time players need to wait before being able to progress through the next mission. There is no 2 ways about it. Players want to progress, but there are moments when there is nothing else to do but wait.

Incidentally, considering how strong an appointment mechanism this system creates, there is a huge opportunity for the game to leverage its push notifications more. Collecting a large amount of resources after being away from the game is hugely rewarding – and makes the first login of the day extra enjoyable. But currently the only push notifications are chat messages and collecting arena rewards. The game really just needs a push notification to tell players when they’ve accumulated enough resources for the next upgrade – and try the next campaign mission.

The waiting game has a central role in AFK Arena. But – perhaps as a result of that – the game makes spending immediately gratifying and rewarding.

One huge limitation of the shard system that exists in some RPGs is that players can spend money in the game and walk away with nothing they can use. It’s one thing to get a bad character –at least you can put it on your team and use it. It’s another thing to walk away with shards of a character you can’t immediately do anything with. It doesn’t mean games with the shard system can’t be hugely successful (Heroes’ Charge, SWGoH of Marvel Strike Force are clear examples of that). But it means that with the shard system, players can spend in the game and have nothing useable to show for it. That doesn’t make for a rewarding and gratifying experience – which is something that can always be improved.

In AFK arena, spending is always about immediate gratification. Players always walk away from their purchase with full characters or piece of gear: spending means you get something tangible you can use immediately (even if it’s of low quality). The default gacha costs 300 gems (approximately $4.99) and guarantees a hero. The drop rates for the highest rarity are pretty good. To be specific, this is the drop rate for the highest rarity available for purchase. Elites can be ascended to Elite+, Legendary, and Ascended. And all that requires a lot of duplicates (hence gems). 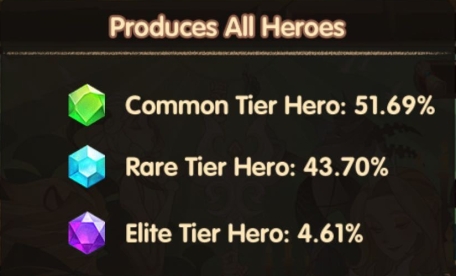 There are multiple offers: daily, weekly and monthly deals, contextual and time-limited offers. Always, these offers are at a low price-point and with aggressive discounts. 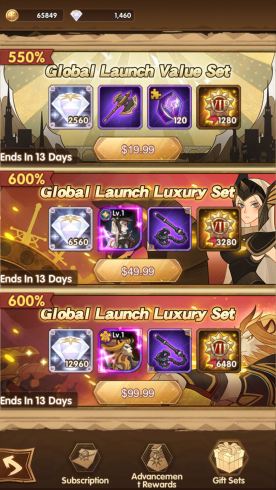 What’s most interesting are the “Advancement Rewards” and the “Regal Rewards”. The Advancement Reward is a monetization feature that allows players to get gems as they complete chapters in the campaign. Every milestone when players can collect gems, they collect enough to do at least a 10-pull in the gacha shop. And if players make it to complete region 19 – don’t know how long that takes but I’m going to go with a lot – they will have collected 45000 gems. What’s interesting here is that it’s like a non-time limited version of the Battle Pass (where non-payers get nothing). Player spend $19.99 to get a layer of rewards for their progression (rewards they wouldn’t get if they progressed that far but didn’t purchase the advancement rewards). And potentially 30x the gems they would get at the default price.

There is a “standard” Battle Pass-like feature: the “Regal Rewards”. As players unlock Medals of Valor (Battle Points) they unlock rewards. Players have 7 weeks to progress as much as they can and collect as many rewards as they can. If players buy the premium pass for $24.99 they also get a premium layer of rewards. And like the Battle Pass, regardless of when players purchase the premium pass, they get all the premium rewards that correspond to their invested engagement. What’s interesting is that it ties it to the daily/weekly goals. Medals of Valor are obtained by completing the daily and weekly challenges. So effectively it’s a very low cost implementation of the Battle Pass – that doesn’t require the production of new assets or supporting any in-game event. And because it’s tied to daily/weekly quests it can also be set to the desired frequency at no cost. 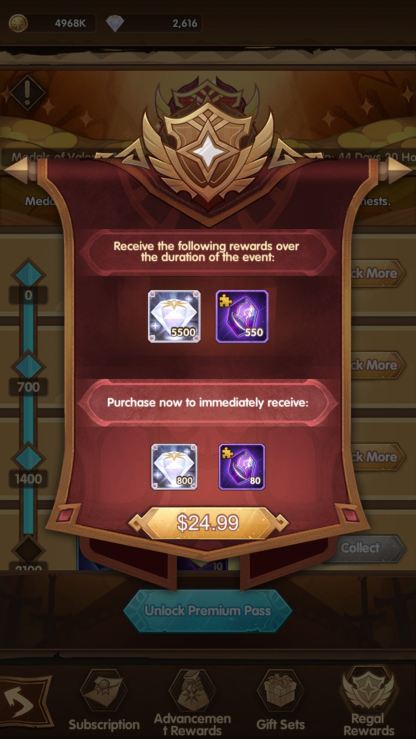 In AFK Arena, there is a clear advantage a payer will have over a nonpayer: spending in the game helps overcome an “ascension gate” faster. But when it comes to resource accumulation and the collection mechanism there is no direct advantage to spending. However, the VIP system does provide a huge indirect benefit to payers. And considering how important and valuable the VIP benefits are for players, the game doesn’t do a great job at surfacing and promoting the VIP system. The higher up the VIP rank the player gets, the more gold and XP s/he can collect from the idle mechanism. Also crucial, higher VIP ranks allow players to perform more finite actions: more fast rewards, more attempts at the Guild Boss or daily bounties. 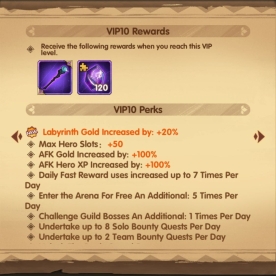 There are so many offers it feels like the “default store” is not a big source of revenue. It rather feels like the default store acts as a decoy for the various offers and “Gift Sets” – but then again that’s not necessarily a bad thing. 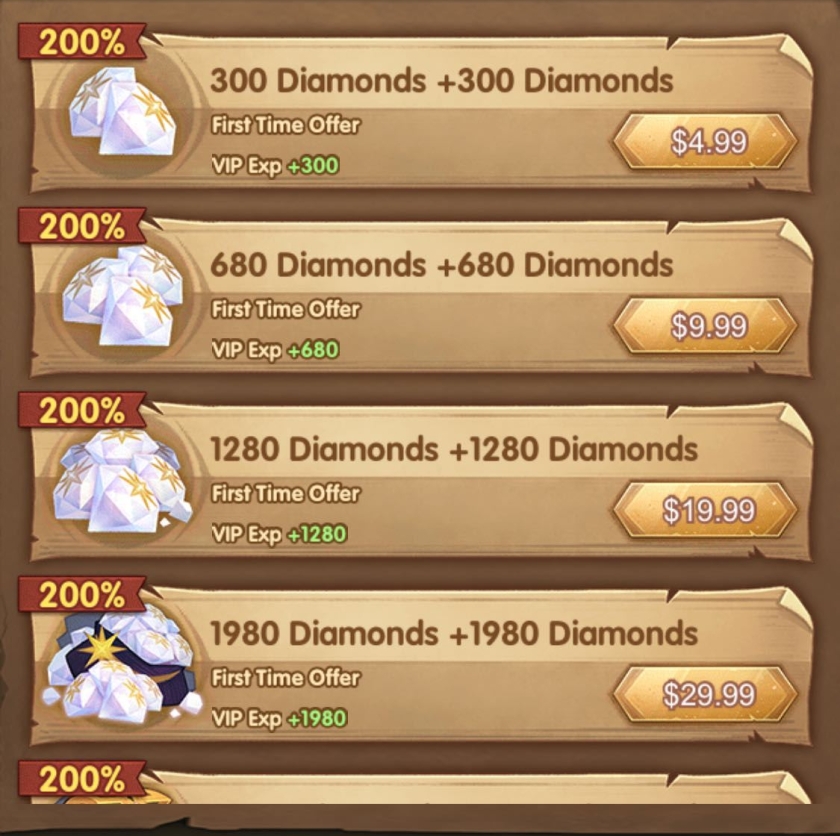