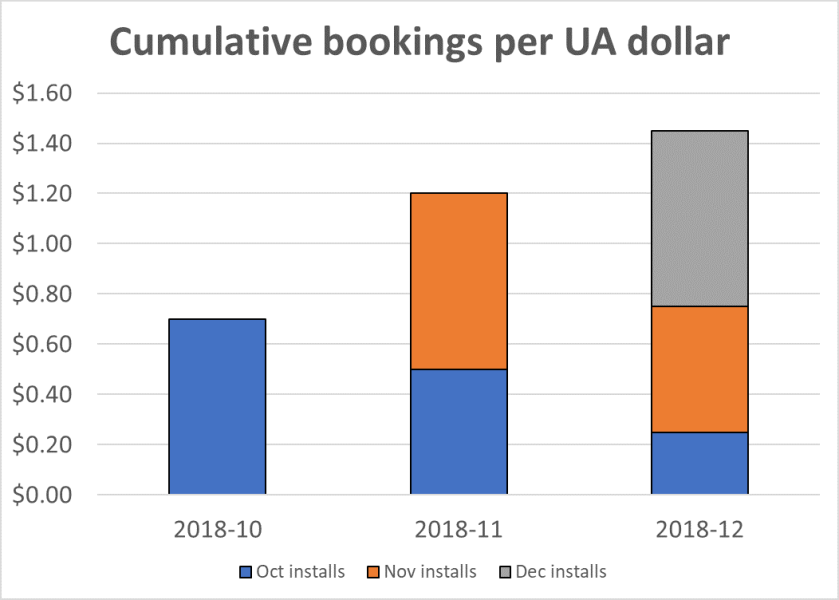 when we launch a new title, and this will apply to Diner DASH Town, Disney/Pixar and WWE when we launch them, in [indiscernible] of the first 2 weeks of launch, I would call it we spend kind of a non-ROI escape velocity money of about $1 million to $2 million per title in that 1 or 2 weeks to help kind of get the game into orbit. After that, after featuring is done and that escape philosophy marketing is done, then we are spending ROI-based driven dollars based on whatever time horizon we feel, whether it’s a 1-year payback or 1.5-year payback. And historically, that has ranged between 20% and 27% of gross revenue.

This statement reflects a generally accepted practice when it comes to the worldwide launch of free-to-play mobile games (and it’s a best practice in my opinion). You want to accompany the launch of your game with a big influx of players to ensure it reaches a threshold where it can be generating bookings and contributing to your bottom line. This week I’m going to try to give my personal opinion on two specific points about this. First, how do you determine where “orbit” is. Second, how do you determine the push you need to send your game into orbit? And here I’m going to be suggesting ways to think about this that are still ROI sensitive – so not necessarily the “non-ROI escape velocity money” mentioned above.

The other reason why worldwide launch is important is because you need to gain momentum quickly. In a theoretical world where you’re only considering the LTV/CPI couple, the speed at which you scale up your game doesn’t matter (assuming both LTVs and CPIs are stable throughout time – which is another theoretical assumption disproven in practice. You need to make sure you go after opportunities when they’re there because you can’t be sure that favorable context will last and that opportunity will still be there in 6 months or a year). You can theoretically scale up very slowly and profitably. But if you’re only looking at LTV/CPI you are leaving aside one key factor: the cost to generate those bookings.

Ultimately LTV is one (crucial) part of the equation – that’s what’s going to determine whether or not you have a business case, and to what point you can hope to scale up your game. But it’s not the only factor to consider. You presumably have a team dedicated to your game when you go worldwide – and a bunch of other operational costs. You can’t just consider the LTV/CPI ratios – or even just look at your arpdau. Your OPEX cost should be one of the biggest factors to consider when planning your worldwide launch and determining your UA launch budget.

Your UA budget for worldwide launch is a very direct, intentional and obvious decision to spend a determined amount of money. Things might not always be as direct and obvious when it comes to your costs. But when you have a team working on a game, you are implicitly committing resources. This is why you need to have your OPEX in mind when determining your worldwide UA budget. You won’t rely on your OPEX to determine the maximum UA spend at worldwide launch. But your OPEX will help you determine the minimum amount of spending you need to do to ensure your game is generating a positive contribution within a determined time frame.

This is a way to determine what “launching a game into orbit” means. It means getting enough users into your game to ensure that the OPEX outweighs your contribution. Every context is different and there is no right answer to determine how fast that should occur. But generally speaking, the sooner this occurs the better.

How do you get into orbit?

Once you know that getting into orbit starts when your contribution outweighs your OPEX, there are a few things you need to start asking yourself. First, how fast do you want that to occur? Regardless of how much you spend, you need some time to ramp up and have new installs generate enough bookings to outweigh your operational costs. In this case, I think there is no one-size-fits all answer. It will all depend on your organization, other live titles, opportunity costs for allocating headcount, etc.

Second, you need to try to have some sort of idea of your UA ROI. It can be hard to estimate precisely, but if you have tried to get a sense of your UA performance during soft launch and/or if you have other comparable titles you should be able to make a rough estimate (and then refine/iterate as you go). You specifically want to be looking at the following: for every dollar spent in UA, how does that translate into actual bookings for the first month/week, the second month/week, the third, etc.

One easy way to visualize this is to start looking at any live game you might have. If you have a good sense of how your UA performs for your game you’re about to launch worldwide, you should be able to do the same. This in turn will help you determine what’s amount of UA you should be spending to get into orbit within the desired timeframe.

For the following example, let’s look at the spending done by users who installed in October 2018. I suggest looking at the revenue generated by all installs (not just paid installs). But if you can make this work by looking at only paid installs kudos to you. 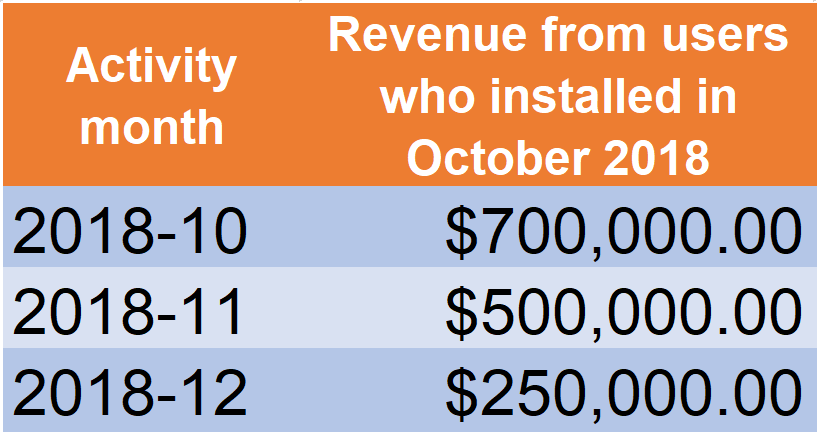 Now let’s say you spent $1,000,000 in UA in October. You are then able to determine month over month how much bookings are generated for every UA dollar.

So basically, at this point you know how much bookings your UA spending will generate on the first month, the second month, etc.

I mentioned in my previous post why you didn’t want to be stacking user LTVs to determine your bookings. But in this case you want to be stacking the bookings that derive from UA spending. That’s because a) the input and output are the same (dollar in/dollar out), b) you are looking at a high enough level of generalization so you won’t be snowballing and compounding the uncertainty of the metrics you’re using (monthly aggregation) and c) you will be looking at things relatively short term (let’s say a few months). So, in October you get the month 0 booking from your October installs. In November you’ll get the month 1 bookings from your October installs and the month 0 bookings from your November installs, etc. Your bookings will look something like this.

So in this case when you spend $1 in UA every month, after 3 months you will generate $1.45 in bookings. Because you are continuously investing in marketing you are reinvesting $1. You are left with $0.45 in positive contribution. Here you can determine you can determine how much UA you need to spend to cover both the UA spend and your OPEX after 3 months. Let’s say you OPEX is $200k. So you need to spend 200,000/0.45=$444,444k per month in UA in order to break even after 3 months. And after that growth.

No matter how you look at it there will be a cost associated to launching a title worldwide – whether an explicit spend on a big UA push or an implicit spend with headcount. The one question you need to ask is whether you’re better off dedicating those resources via headcount or via non-ROI positive UA spending. You can spend a large amount unprofitably, or spend on team resources – in the current example you’re spending 2 months of OPEX so $400k. So that might be cheaper than spending $2M with sub-optimal ROI. But again, this is a very context-sensitive question only you can answer. Looking at things this way should at least help you determine what the minimum amount of UA spending you should be aiming for for worldwide.