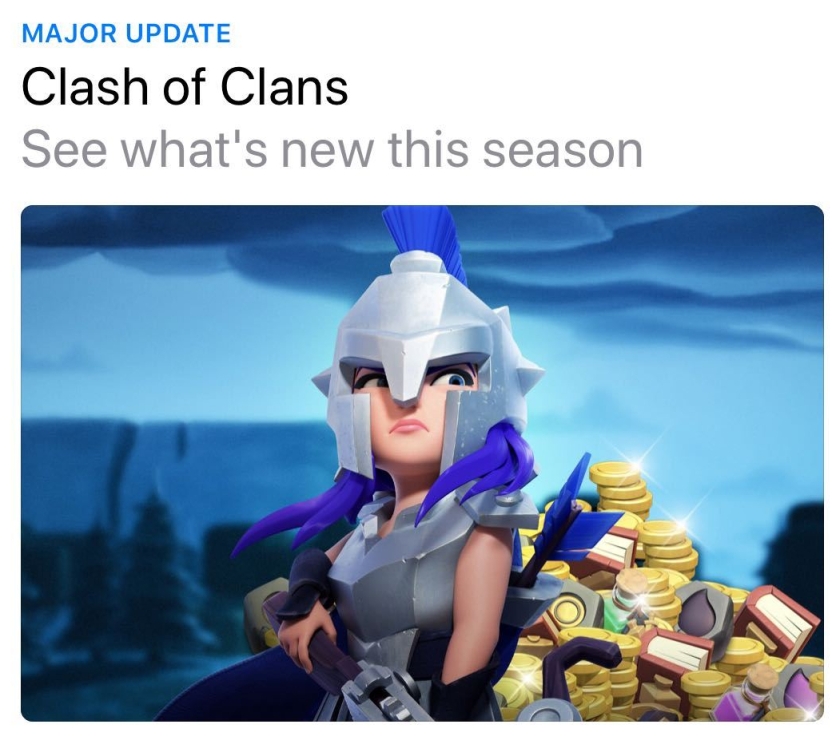 In my previous post I broke down Fortnite’s Battle Pass, and identified what I feel are some of the main aspects of that monetization feature. This checklist can serve as the basis to look at how other games implement their own version of the Battle Pass – or help identify opportunities for improvement and make that feature more in line with the specificities of each individual game.

In today’s post I’m going to look at Clash of Clans’ implementation. Clash of Clans if the most successful title yet to implement it’s own version of the Battle Pass – but it most certainly won’t be the last. The fact that Clash of Clans implemented its own version of the Battle Pass – and the fact that it had such a noticeable impact on revenue – shows how the Battle Pass is a monetization format that can be adapted to many different games and genres. And that it’s very effective at monetizing because it capitalizes capitalizing on your fans’ willingness to engage with your game – even if your game is not Fortnite.

Below how Clash of Clans’ Season Pass works, and what the noticeable differences with Fortnite’s Battle Pass are. 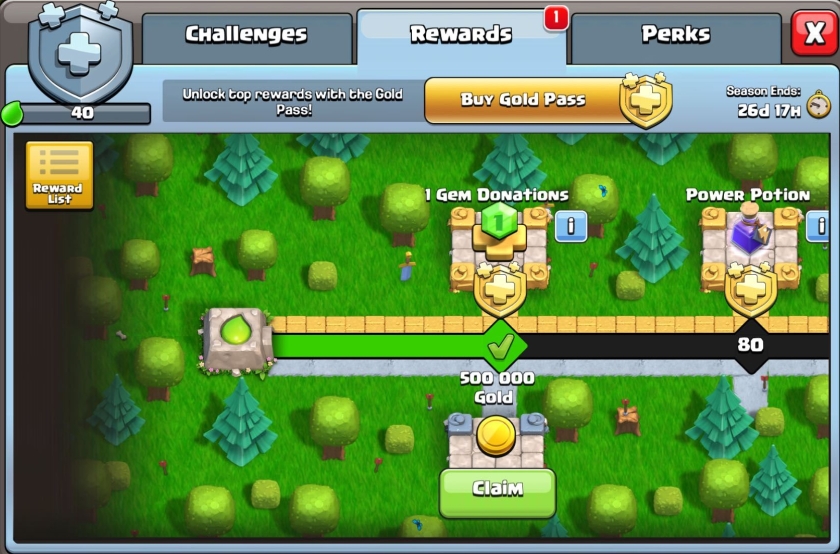 Small points of detail. Unlike Fortnite, the tiers are not front-and-center for the players – it’s not as central to player’s progression in the game. It doesn’t define where the player is at – at least as much as what level his/her Town Hall is. Also, each tier doesn’t progress linearly. In Fortnite players go up a tier every 10 Battle Points. In Clash of Clans the requirements to go up a tier increase as players progress (40 Challenge Points to the next reward tier, 60, 80, 100).

This is a big point of difference in Clash of Clans’ implementation. In Clash of Clans players can only go up in the Season Pass by completing specific challenges. Leveling up or gaining XP (or collecting resources for that matter) do not contribute to players gaining Battle Points. In the Season Pass, only qualified engagement will allow players to accumulate Challenge Points. 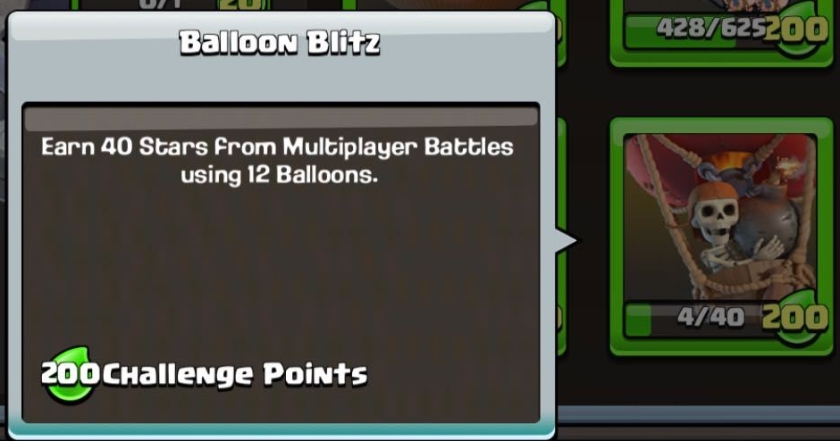 3) The Battle Pass and seasons

The Battle Pass is tied to a month-long season. Just like in Fortnite that means there is a time factor that determines a) the time frame within with engagement and progression must take place and b) the time frame during which players can purchase the Season Pass (and therefore the timeframe within which players can collect the rewards associated to their engagement).

However, unlike Fortnite, there are no changes to in-game content or to the map that go with the season. The season is simply the time-frame during which engagement will be tracked and rewards can be obtained.

There are 2 different levels to Clash of Clans’ Season Pass: the Sliver Pass and the Gold Pass. One interesting thing here. Clash of Clans sells the Gold Pass for $4.99. The only option to acquire the Gold Pass is via IAP. In that respect, from a monetization point of view, it seems like an improvement over Fortnite. Fortnite sells the Battle Pass for in-game currency – and the Battle Pass rewards players with enough in-game currency to purchase the next one. By making the Season Pass an IAP, Clash of Clans creates a need for an IAP every month when a new season begins – and at the same time it retains the option to reward players with resources and currency without compromising future sales. 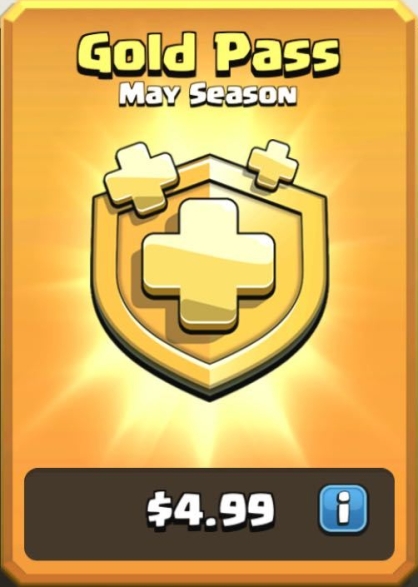 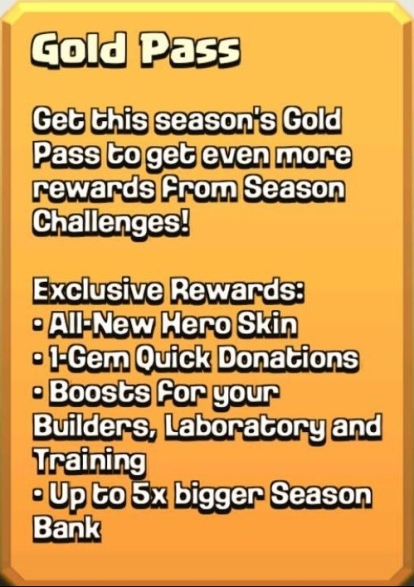 This is an important point of difference where some choices in Clash of Clans’ implementation don’t feel optimal.

In Fortnite, the season pass is always worth buying because of 2 things. First, the purchase moment doesn’t impact the rewards received – what matters is how engaged players are throughout the season. Second, there is no expiration date for the rewards received. Or more specifically, the usage of rewards is not tied to the day the season end.

As far as the first point goes, Clash of Clans is in line with Fortnite. The amount of engagement determines the rewards, not the moment of purchase. But some of the key rewards are boosts that are only valid for the duration of the season: those are the “Perks”. So that means the closer to the end of the season, the less incentive a player has to purchase the Gold Pass – because s/he will be paying the same $4.99 to get the Gold Pass, but the period of time during which s/he will benefit from the boost depends on the moment the purchase occurs. 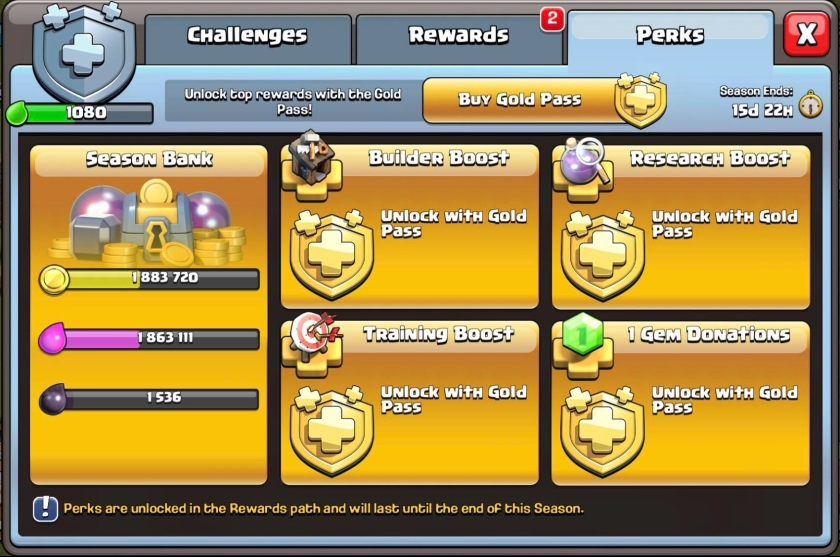 On one hand I understand you don’t want passive boosts earned in one season to be active for the next season (and potentially reduce the incentive to spend then). But on the other hand, and with the way Perks are implemented, the later in the season, the less incentive a player has to purchase the Gold Pass. Presumably in Fortnite most Battle Passes are sold on the early weeks, things flatten out, and there is a slight bump in sales when the season is about to end. My guess is that there is a much smaller bump in sales in Clash of Clans’ season pass – you have an incentive to purchase the Battle Pass at the end, but only for players who have been very engaged and reached the final reward. And in that case players are presumably spending once they have the guarantee they were engaged enough to unlock the reward they want (or once they know they’ve played enough to fill the free version of the Season Bank).

Clash of Clans features different types of challenges. There are 3 daily challenges that reset daily (always the same: they involve attacks and donations). In addition, there are bigger, more complicated tasks (that provide more challenge points) that unlock throughout the season. 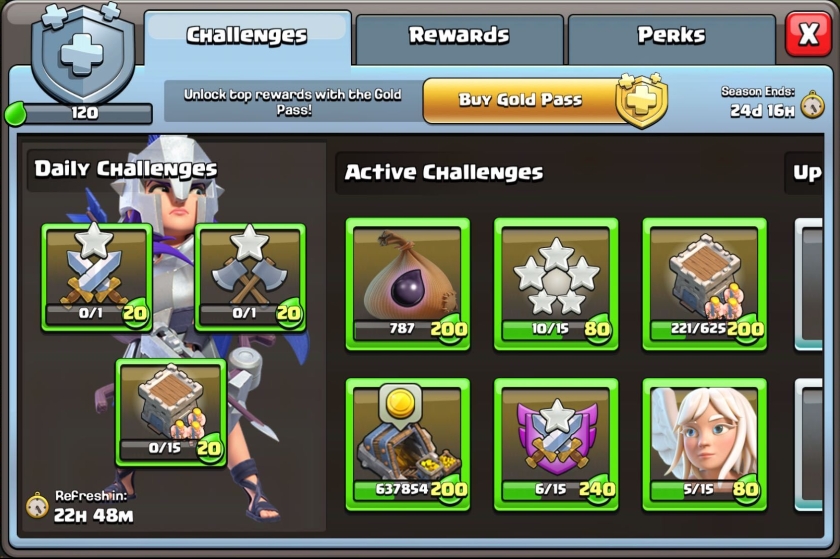 The important thing here is that all players have access to the same challenges.

This is leaving out something that is especially compelling for an engaged user. If you are buying the Gold Pass, then that means you are engaged and a fan of the game. And Challenges are something that are especially valuable for someone very engaged. It helps break the monotony and provides goals to achieve.

In Fortnite having additional challenges for players with the premium Battle Pass is a way to enable them to a) gain more Battle Points (hence rewards) and b) provide more goals and objectives. Clash of Clans’ implementation leaves something big out of the picture.

Clash of Clans simply doesn’t support this feature. Then again, seasons are shorter than in Fortnite. Also, most rewards are not exclusive – so that means players will be less compelled to spend to get to a tier to get a reward. Instead of paying to go up a tier and get the reward, they can simply directly buy that reward in-game.

There are multiple rewards in the Season Pass: magic items, resources, perks and hero skins. Only the Hero skin is exclusive. All other items are resources, or indirectly resources. 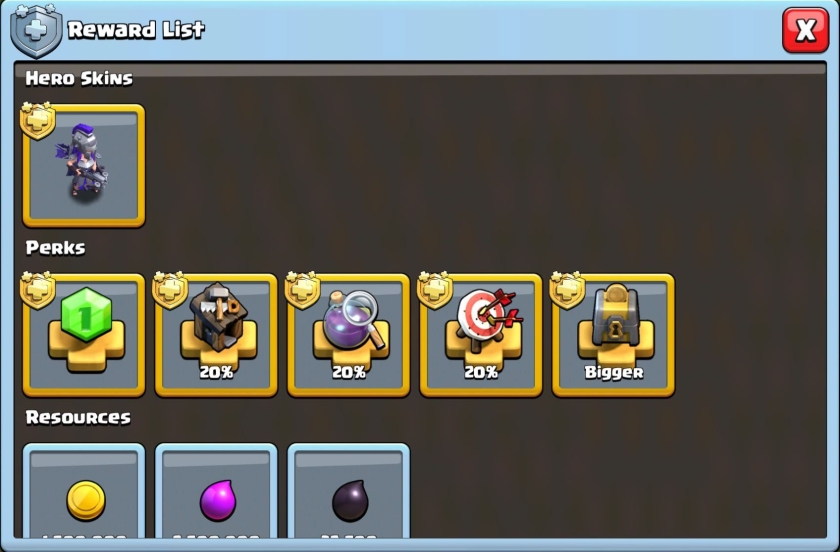 Some of the perks are interesting. The first premium perk unlocked is the “1 Gem Donation”. That means all quick donations cost only 1 gem (so, it’s something of value to the player, and at the same time it encourages spending). The season bank fills as player loot opponents in multiplayer battles – and contents are received that the end of the season. If players have the Gold Pass their season bank can store more. That’s good inasmuch as it creates an incentive for engaged players to be even more engaged – and fill in the enlarged season bank as much as possible. But it feels like something less compelling for a moderately engaged player. Basically if you don’t plan on looting more than 5,000,000 gold and elixir during the season, the increased capacity does nothing for you. 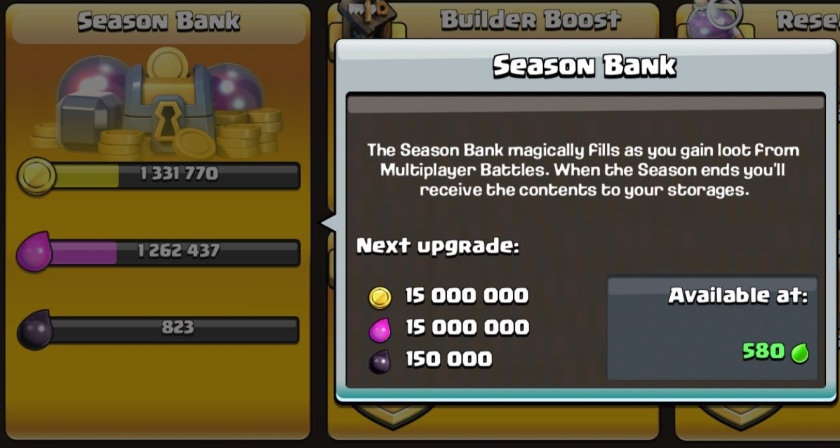 As monetization goes, the fact that there is only one exclusive item – for players who managed to complete the Season Pass – means the Season Pass competes with other monetization features in the game. Anything you get via the Season Pass, you can already get immediately in the game (and without any gameplay requirements). But in turn, the fact that only the final reward is exclusive makes it extra special. Perhaps by having fewer exclusive rewards, it actually makes them stand out – thereby making the Season Pass even more enticing and compelling for the biggest fans (but it would be less effective for moderately engaged fans that don’t reach the final tier).

The resource-based rewards or items (books, runes, potions) can be stored and used by the players whenever they want. The Hero skin is something permanent players can use unconditionally and immediately as soon as they receive it.

However, as mentioned before the perks are only valid for the duration of the season. That means buying the gold pass later in the season is less rewarding than buying it later (there are fewer days to benefit from the perk). The upside is that this puts more emphasis on the season and potentially makes it more compelling. You collect rewards during the season – but also have some benefits only active during the season.