Last month Clash of Clans rolled out its own version of the Battle Pass: the Season Pass. And according to estimates from Sensor Tower it had a significant impact on the title’s revenue. Because of how effective and rewarding the Battle Pass is – and because it can be implemented in pretty much any game – it seems pretty reasonable to expect the Battle Pass will become a common monetization feature in many free-to-play games in the near future. In today’s post, I’m going to go over a few key aspects of Fortnite’s Battle Pass. In my next post, I’ll look at Clash of Clans’ Season Pass, and see how it measures up to Fortnite’s Battle Pass.

The Battle Pass in Fortnite

The Battle Pass is a great monetization system. Other games have already implemented their version of the Battle Pass, and I expect that trend to continue. But Fortnite’s Battle Pass is (justifiably so) the standard bearer for the moment.

That’s the main characteristic of this monetization feature. The Battle Pass is a way to track, measure and reward player engagement. As players engage more and more with the game, they get different rewards. Simply put, with the Battle Pass, the more players play, the more rewards they get.

In Fortnite players accumulate Battle Points when they play – every 10 Battle Points unlocks a new tier. There are 100 tiers in a Battle Pass. And every tier achieved unlocks new rewards. 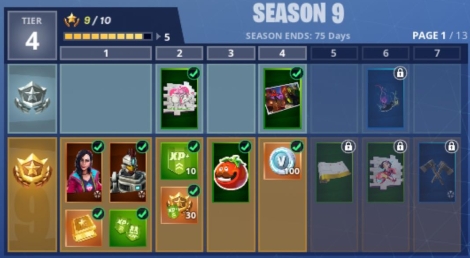 There are 2 ways to gain Battle Points and tier up in the Battle Pass. The first one is unqualified engagement. By simply playing the game, gaining XP and leveling up, players get Battle Points. I call that unqualified engagement because it doesn’t matter how players play or what they do. As long as they are gaining XP and leveling up, they are able to progress in the Battle Pass.

The second one is what I call qualified engagement. It’s about more than simply playing the game in any way possible. Players need to perform specific actions or sequence of actions. That’s where challenges come in. Challenges are specific in-game tasks players must complete to gain Battle Points. The more challenges players complete, the more they tier up. And in Fortnite challenges are by far the main way to go up tiers – not XP and leveling up.

3) The Battle Pass and seasons

In theory, you could imagine a Battle Pass that’s not tied to a season. In that case there would be no time-limit to complete the Battle Pass, and once it’s completed there would be no more rewards to collect. Or you could even imagine one Battle Pass with no time limit – but where you keep adding tiers and more rewards. While there could be some production context in which this could make sense (a skeleton team working on a game with low long-term retention and low prospects for repeat IAP spending – hypercasual?) not having any expiration for the Battle Pass means you’re talking about a one-time purchase – with no opportunity for repeat purchases and limited monetization potential over time. Any game that does Live Ops and releases new content should simply tie-in the content release calendar to different “seasons”. And have new Battle Passes at a given frequency.

There is also something interesting in terms of the balancing of rewards in the Battle Pass. As players go up tiers, they can get V-Bucks. A player who has the premium Battle Pass and who completes all 100 tiers in season 8 receives in total 1500 V-Bucks – enough to purchase the Battle Pass for the next season without needing to make another IAP. So that means with the current tuning, purchasing the Battle Pass once and playing regularly removes the necessity to pay for future Battle Passes. And the Battle Pass is arguably one of the most compelling monetization features of Fortnite (at the very least, it’s the closest thing approaching a meta).

This feels like a very effective way to keep engaged players engaged. But you have to wonder to what extent this way of balancing means missed opportunities to monetize those more engaged players. Someone completing all 100 tiers in a season is a very engaged user – so presumably you don’t need to do much (and give out many rewards) to keep that type of player engaged (and to have him/her keep buying the Battle Pass every season).

In Fortnite, achieving a given tier means you virtually unlocked the premium reward that goes with it if you upgrade to the premium Battle Pass. This can seem like a form of loss aversion – but I think there are some crucial differences in Fortnite’s model. The best example of loss aversion for me still remains the Puzzle and Dragons/Brave Frontier implementation. Players fight different waves of enemies in a same dungeon. When players progress and beat a wave they get rewards in their inventory. But they can only actually collect those rewards once they beat all the waves and complete the dungeon. Loss aversion happens when players lose and are prompted to continue. If players don’t continue, they won’t get the loot they accumulated along the way. And this is especially compelling for dungeons where players want to farm evolution materials. In the case of Brave Frontier, this loss aversion is created by dramatizing the purchase moment. “Pay a gem to continue now or lose your loot forever” is the message players are confronted to.

Things are different in Fortnite. You don’t get less, nor are your rewards worth less, if you don’t purchase the Battle Pass by a given moment. You tier up weather or not you buy the premium Battle Pass. When you purchase it you get the benefits of all the engagement invested in a season.

The Battle Pass is all about capitalizing on positive emotions. What matters is how much you play during the season: the more you’ve played the more rewarding the purchase becomes. What determines the value of your purchase is how much you’ve played, not when you’ve made the purchase. Players can always reap the rewards of their engagement at any time. There is no time pressure, and users are never confronted to an impeding loss if they don’t take action. You will always collect the same rewards from a similar level of engagement – regardless of when your purchase occurs.

The only time pressure occurs when a season is about to end. But the Battle Pass is monetizing because it’s rewarding players – not because it’s scaring them into buying something they might lose if they don’t purchase it now.

There is a functional/extrinsic aspect that makes premium challenges valuable. Very simply, players can get more rewards if they have more challenges to complete. But having more challenges is also a way to give more structure to playing a game that is always the same and features no meta or progression system. That’s an important added value for someone playing the game daily. It provides a sense of purpose – and always new goals when playing a match.

Player can go up tiers by playing – either simply leveling up or completing challenges. In Fortnite players can also directly purchase tiers if they want to unlock a given reward immediately. Players can spend V-Bucks to buy tiers in different ways. They can directly purchase the tiers they want (for 150 V-Bucks per tier). 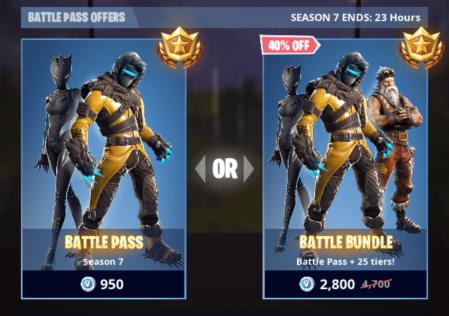 This is relevant because purchasing tiers constitutes another source of spending related to the Battle Pass. I haven’t come across any numbers shared by Epic – but I’m going to assume much more V-Bucks are spent on acquiring the Battle Pass than on purchasing tiers. But since the Battle Pass is the most compelling monetization feature of the game, any additional way to monetize it seems like the right move.

As mentioned above, every tier in the Battle Pass unlocks a new reward. And some items are only unlocked for players with the premium Battle Pass – such as player skins or pets.

But every tier in the Battle Pass – whether the free or the premium version – rewards players with exclusive items. By exclusive items, I mean items that cannot be purchased in the shop or acquired by any other means. I’m a huge fan of selling exclusivity – you need to ensure the experience of your paying users is the best possible if you want your customers to be happy with their purchase and spend again.

Rewards don’t need to be exclusive for the system to work – but having something exclusive always makes for a better experience for the paying user.

One general principle of monetization (at least according to me) is that you need to focus on positive emotions and immediate gratification. Frustrating players into spending is more the result of an uninspired monetization strategy – it’s not a fundamental principle of free-to-play monetization.

The rewards featured in the Battle Pass are skins, currency, splash screens, V-Bucks, etc. Those rewards are immediately gratifying. That’s what ensures the value proposition when buying the Battle Pass doesn’t decrease over time and it’s always worth buying. The cosmetic only approach is not a requirement to have a Battle Pass – but it does make it easier to give users unconditionally and immediately usable rewards (by the way resources and currency also do the trick).

Incidentally, that’s one of the main shortcomings I’ve seen in Apex Legends. Apex’s Battle Pass rewards players with skins for specific characters and weapons. And that’s something that makes the rewards less appealing. In order to be able to use the reward, the player has to be able to select that character (maybe someone else on the team chose it first) or come across that specific weapon on the map. More importantly, maybe the player has no interest in that particular character or weapon. Now compare that with Fortnite, there is no functionality and every skin can be used regardless of player style (there are no character skills). Also, every weapon skin can be applied to any weapon. As long as players play the game and pick up a weapon, they can benefit from their weapon skin.